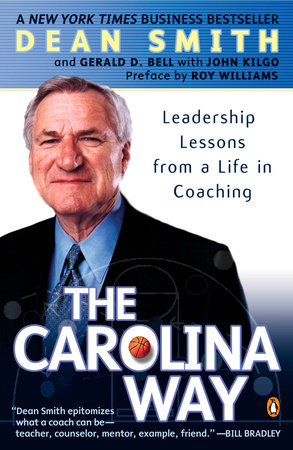 An Excerpt From
The Carolina Way
by Dean Smith
Gerald D. Bell
John Kilgo
Preface by: Roy Williams
While we didn’t have a system at North Carolina, we certainly had a philosophy. We believed in it strongly and didn’t stray very far from it. It pretty much stayed the same from my first year as head coach. It was our mission statement, our strategic plan, our entire approach in a nutshell: Play hard, play smart, play together.

Hard meant with effort, determination and courage; smart meant with good execution and poise, treating each possession as if it were the only one in the game; together meant playing unselfishly, trusting your teammates and doing everything possible not to let them down.

That was our philosophy: We believed that if we kept our focus on those tenets, success would follow. Our North Carolina players seldom heard me or my assistants talk about winning. Winning would be the by-product of the process. There could be no shortcuts.

Making winning the ultimate goal usually isn’t good teaching. Tom Osborne, the great former football coach of the University of Nebraska, said that making winning the goal can actually get in the way of winning. I agree. So many things happened in games that were beyond our control—the talent and experience of the teams, bad calls by officials, injuries, bad luck.

By sticking to our philosophy, we asked realistic things from our players. A player could play hard. He could play unselfishly and do things to help his teammates succeed. He could play intelligently. Those were all things we could control, and we measured our success by how we did in those areas.

When we put these elements together, the players had fun, which was one of my goals as their coach. I wanted our players to enjoy the experience of playing basketball for North Carolina. Each player on our team knew he was important. They all did a terrific job of sharing the ball, which also made the game enjoyable for more players. They won and lost as a team.

Of course, it is easier to talk about playing hard, playing smart, and playing together than it is to do all three. It begins by recruiting unselfish players who subscribe to the philosophy of team over individual. I once taught a summer physical education class at the Air Force Academy and we had one young man who shot every time he touched the ball. Exasperated from watching him, I pulled his four teammates off the court. He asked who would throw the ball inbounds to him. “You understand that it takes at least one more player,” I said to him.

Play Hard: Maybe a player wasn’t the fastest, the tallest, or the most athletic person on the court. In the course of any given game, that was out of his control. But each player could control the effort with which he played. “Never let anyone play harder than you,” I told them. “That is part of the game you can control.” If another team played harder than we did, we had no excuse for it. None. We worked on it in every practice. If a player didn’t give maximum effort, we dealt with it right then. We stopped practice and had the entire team run sprints because of the offending player. We played a style of basketball that was physically exhausting and made it impossible for a player to go full throttle for forty minutes. When he got tired, he flashed the tired signal (a raised fist) and we substituted for him. He could put himself back in the game once rested. We didn’t want tired players on the court, because they usually tried to rest on defense. That wouldn’t work in our plan. Therefore, we watched closely in practice and in games to make sure players played hard. If they slacked up, it was important to catch them and get them out of the game, or if it occurred in practice, to have the entire team run.

Play Smart: We taught and drilled until we made the things we wanted to see become habits. The only way to have a smart team is to have one that is fundamentally sound. We didn’t skimp on fundamentals. We worked on them hard in practice and repeated them until they were down cold. We didn’t introduce something and then move away from it before we nailed it.  If we practiced well and learned, we could play smart. It was another thing we could control.

Play Together: One of the first things I did at the beginning of preseason practice was to spell out for our players the importance of team play. Basketball is a game that counts on togetherness. I pointed out that seldom, if ever, did the nation’s leading scorer play on a ranked team. He certainly didn’t play on a championship team. I made them understand that our plan would fall apart if they didn’t take care of one another: set screens, play team defense, box out, pass to the open man. One man who failed to do his job unselfishly could undermine the efforts of the four other players on the court.

Leadership Lessons from a Life in Coaching