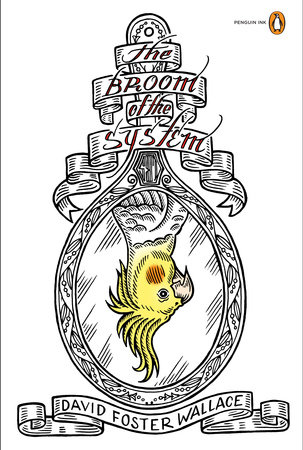 An Excerpt From
The Broom of the System
by David Foster Wallace
Illustrated by: Duke Riley
One

Most really pretty girls have pretty ugly feet, and so does Mindy Metalman, Lenore notices, all of a sudden. They're long and thin and splay toed, with buttons of yellow callus on the little toes and a thick stair-step of it on the back of the heel, and a few long black hairs are curling out of the skin at the tops of the feet, and the red nail polish is cracking and peeling in curls and candy-striped with decay. Lenore only notices because Mindy's bent over in the chair by the fridge picking at some of the polish on her toes; her bathrobe's opening a little, so there's some cleavage visible and everything, a lot more than Lenore's got, and the thick white towel wrapped around Mindy's wet washed shampooed head is coming undone and a wisp of dark shiny hair has slithered out of a crack in the folds and curled down all demurely past the side of Mindy's face and under her chin. It smells like Flex shampoo in the room, and also pot, since Clarice and Sue Shaw are smoking a big thick j-bird Lenore got from Ed Creamer back at Shaker School and brought up with some other stuff for Clarice, here at school.

What's going on is that Lenore Beadsman, who's fifteen, has just come all the way from home in Shaker Heights, Ohio, right near Cleveland, to visit her big sister, Clarice Beadsman, who's a fresh man at this women's college, called Mount Holyoke; and Lenore's staying with her sleeping bag in this room on the second floor of Rumpus Hall that Clarice shares with her roommates, Mindy Metal man and Sue Shaw. Lenore's also come to sort of check out this college, a little bit. This is because even though she's just fifteen she's supposedly quite intelligent and thus acceleratedand already a junior at Shaker School and thus thinking about college, application-wise, for next year. So she's visiting. Right now it's a Friday night in March.

Sue Shaw, who's not nearly as pretty as Mindy or Clarice, is bringing the joint over here to Mindy and Lenore, and Mindy takes it and lets her toe alone for a second and sucks the bird really hard, so it glows bright and a seed snaps loudly and bits of paper ash go flying and floating, which Clarice and Sue find super funny and start laughing at really hard, whooping and clutching at each other, and Mindy breathes it in really deep and holds it in and passes the bird to Lenore, but Lenore says no thank you.

"No thank you," says Lenore.

"Go ahead, you brought it, why not . . . ," croaks Mindy Metal man, talking the way people talk without breathing, holding on to the smoke.

"I know, but it's track season at school and I'm on the team and I don't smoke during the season, I can't, it kills me," Lenore says.

So Mindy shrugs and finally lets out a big breath of pale used-up smoke and coughs a deep little cough and gets up with the bird and takes it over across the room to Clarice and Sue Shaw, who are by a big wooden stereo speaker listening to this song, again, by Cat Stevens, for like the tenth time tonight. Mindy's robe's more or less open, now, and Lenore can see some pretty amazing stuff, but Mindy just walks across the room. Lenore can at this point divide all the girls she's known neatly into girls who think deep down they're pretty and girls who deep down think they're really not. Girls who think they're pretty don't care much about their bathrobes being undone and are good at makeup and like to walk when people are watching, and they act different when there are boys around; and girls like Lenore, who don't think they're too pretty, tend not to wear makeup, and run track, and wear black Converse sneakers, and keep their bathrobes pretty well fastened at all times. Mindy sure is pretty, though, except for her feet.

The Cat Stevens song is over again, and the needle goes up by itself, and obviously none of these three feel like moving all the way to start it again, so they're just sitting back in their hard wood desk chairs, Mindy in her faded pink terry robe with one shiny smooth leg all bare and sticking out; Clarice in her Desert boots and her dark blue jeans that Lenore calls her shoe-horn jeans, and that white western shirt she'd wore at the state fair the time she'd had her purse stolen, and her blond hair flooding all over the shirt, and her eyes very blue right now; Sue Shaw with her red hair and a green sweater and green tartan skirt and fat white legs with a bright red pimple just over one knee, legs crossed with one foot jiggling one of those boat shoes, with the sick white soles--Lenore dislikes that kind of shoe a lot.Clarice after a quiet bit lets out a long sigh and says, in whispers, "Cat . . . is . . . God," giggling a little at the end. The other two giggle too.

"God? How can Cat be God? Cat exists." Mindy's eyes are all red.

"Blasphemous?" Clarice dies, looks at Lenore. "Blasphemous," she says. Her eyes aren't all that bad, really, just unusually cheerful, as if she's got a joke she's not telling.

They're dying, doubled over, and Lenore's laughing that weird sympathetic laugh you laugh when everybody else is laughing so hard they make you laugh too. The noise of the big party downstairs is coming through the floor and vibrating in Lenore's black sneakers and the arms of the chair. Now Mindy slides out of her desk chair all limp and shlomps down on Lenore's sleeping bag on the floor next to Clarice's pretend-Persian ruglet from Mooradian's in Cleveland, and Mindy modestly covers her crotch with a comer of her robe, but Lenore still can't help but see the way her breasts swell up into the worn pink towel cloth of the robe, all full and stuff, even lying down on her back, there, on the floor. Lenore unconsciously looks down a little at her own chest, under her flannel shirt.

"We will wait"--Clarice looks at her watch on the underside of her wrist--"one, that is one hour, before eating anything what soentirelyever."

"No we can't possibly possibly do that."

"But do it we shall. As per room discussions of not one week ago, when we explicitly agreed that we shall not gorge when utterly flapped, lest we get fat and repulsive, like Mindy, over there, you poor midge."

"Fart-blossom," Mindy says absently, she's not fat and she knows it, Lenore knows it, they all know it.

"A lady at all times, that Metalman," Clarice says. Then a minute, "Speaking of which, you might just maybe either fix your robe or get dressed or get up off your back in Lenore's stuff, I'm not really all up for giving you a gynecological exam, which is sort of what you're making us do, here, O Lesbia of Thebes."

"Stuff and bother," says Mindy, or rather, "Stuth and bozzer"; and she gets up swaying and reaching for solid things, goes over to the door that goes into her little single bedroom off the bathroom. She got there first in September and took it, Clarice had said in a letter, this Playboy-Playmatish JAP from Scarsdale, and she's shedding what's left of her bathrobe, battered into submission, leaving it all wet in Lenore's lap in the chair by the door, and going through the door with her long legs, deliberate steps. Shuts the door.

The Broom of the System